Upon receipt of a Record of Decision for Section 1, Governor Daniels and the Indiana Department of Transportation (INDOT) wished to advance design and construction of this critical economic artery as quickly as possible. For this reason, Section 1, which encompasses 13 miles of new construction (interstate rural freeway), was divided into five packages. Thanks to Lochmueller Group’s (Lochgroup) intimate knowledge of the corridor from its role as Program Management Consultant for Tier 2, Lochgroup provided design services for all or a portion of three of the five packages, as needed to fast-track design and construction.

In addition to overall Project Management, Lochgroup provided final design of a 1.7-mile section, an interchange at I-69 and SR 64, and four structures. In order to accelerate the schedule, other sections of the road and design of several bridges were taken to 30% design, and then finalized by other team members under Lochgroup’s direction.

Since there was no good local detour on SR 64 to maintain traffic during construction, Lochgroup evaluated several alternatives. A diamond interchange in conjunction with changes to the alignment of SR 64 made it possible to use the existing road as part of the phasing of construction instead of building a temporary run-around saved $911,800. In the fill area along SR 64 wick drains were designed to remove the excess moisture in the existing ground and thus reducing the amount of time needed for settlement.

Changes to the SR 64 alignment involved the design of two new bridges:

Located in a Seismic Zone1, all bridges required careful detailing to address safety issues depending on the soil characteristics. Given the prevalence of farms in the area, bridges were designed to be both wider and taller than normal to provide clearance for combines and other large farm equipment.

I-69 over Unnamed Tributary to West Fork of Keg Creek.  The Level 2 design involved twin, single-span (100’) structures with no skew, supported by integral concrete end bents on piling. Composite prestressed concrete Bulb-Ts were used for this structure. Each structure provides a 40’-4” clear roadway width.

I-69 over Norfolk & Southern Railroad.  To ensure the horizontal and vertical alignment and provide adequate clearances for the railroad crossing, Lochgroup provided 30% plans for this structure just north of SR 64 interchange. The twin single-span (80’) at a 14° left skew. The structures are supported on integral concrete end bents on piling, which are protected by MSE Walls.

Utility coordination was a critical consideration given the proximity of a large natural gas distribution facility owned by Texas Gas Pipeline Storage Facility. Extensive coordination was involved to ensure impacts to five major intrastate gas pipelines could be scheduled during seasonal windows when pipeline usage was low.

In addition, Lochgroup recommended changing the geometry of CR 350S that resulted in not only shortening the overpass, but avoiding impacts to natural gas storage caverns and eliminating the need to replace an existing county bridge-saving $500,000.

To mitigate for the silty soils between CR 350S and SR 64, chemical stabilization was performed early on to stabilize the ground for fill. Mineral rights were also of special concern in developing right-of-way requirements throughout the package. Lochgroup team members worked closely with INDOT to develop guidelines for valuing mineral interests.

Another key to maintaining schedule involved impacts to a property owner agreement that had a previous agreement with US Fish & Wildlife Service’s “Partners for Wildlife” program. This agreement involved 35 acres of compensatory property for wildlife habitat development located on the Gelhaussen property north of CR 450S. After sitting down with the property owner at their home, reviewing the property with them, and understanding their concerns, minor changes in the alignment were incorporated to eliminate taking a portion of their lake.

These proactive, personal “kitchen table meetings” became the foundation for a public involvement process used throughout later sections of I-69. This process, which has proven invaluable in accelerating the project, has continued to evolve, resulting in INDOT being recognized with a Gold Performance Excellence Award by AASHTO for its outreach efforts in I-69, Section 4, on which Lochgroup also played a major role.

“The purpose of the kitchen table meetings was to improve communication with property owners and pro-actively address their concerns. Property owner feedback regarding this program has been very positive.” – Michael B. Cline, INDOT Commissioner

The Engineer’s Report included an overpass on CR 450S for access to property owners on CR 925, a dead end road, along the east side of I-69. This approach was also revisited and a series of alternatives were reviewed. After consulting property owners and local officials, cul-de-sacs were placed on CR 450S with access to the properties being provided by reconnecting CR 925 to CR 550S. This access road would then be relinquished to the county for maintenance. Since this new alignment eliminated the CR 450S overpass and the need to purchase land-locked parcels, it resulted in a savings of $3,422,400.

To preserve habitat connectivity, small and large mammal crossings were incorporated, including a unique box culvert near CR 450S to allow for deer and other large wildlife to cross under the freeway at an abandoned railroad crossing. Because of the length of the wildlife crossing going under I-69 it was determined that a small twin bridge structure would be the best choice because it would provide a more open, natural feeling for the wildlife than a box culvert. Two types of bridges were investigated, and a recommendation was made to use a structure featuring MSE wall, along with creative grading and landscaping, was chosen to help guide the wildlife under the bridge and keep them from coming up in the median. Additional small mammal, reptile and amphibian crossings were also incorporated into a drainage structure near CR 550S. 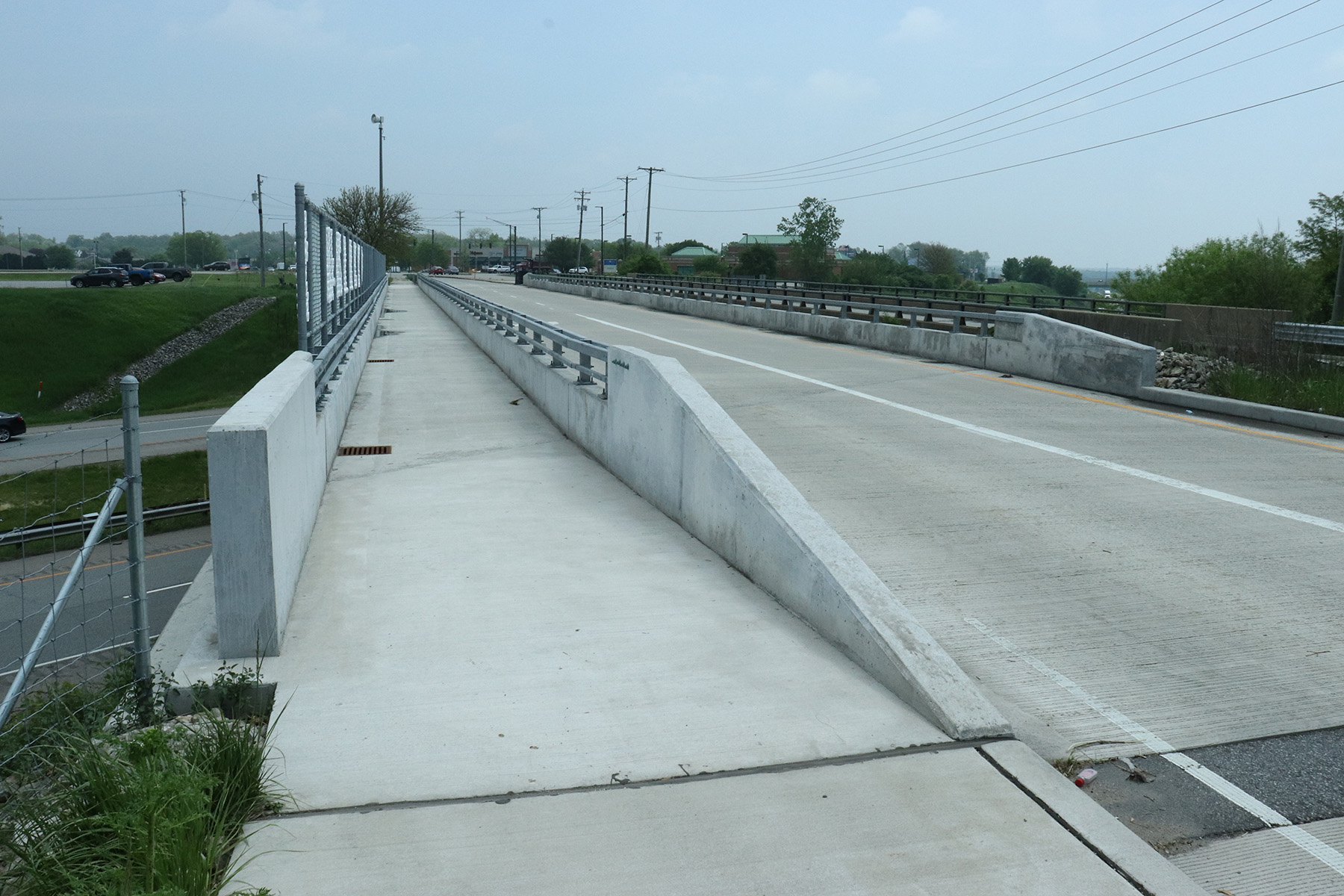 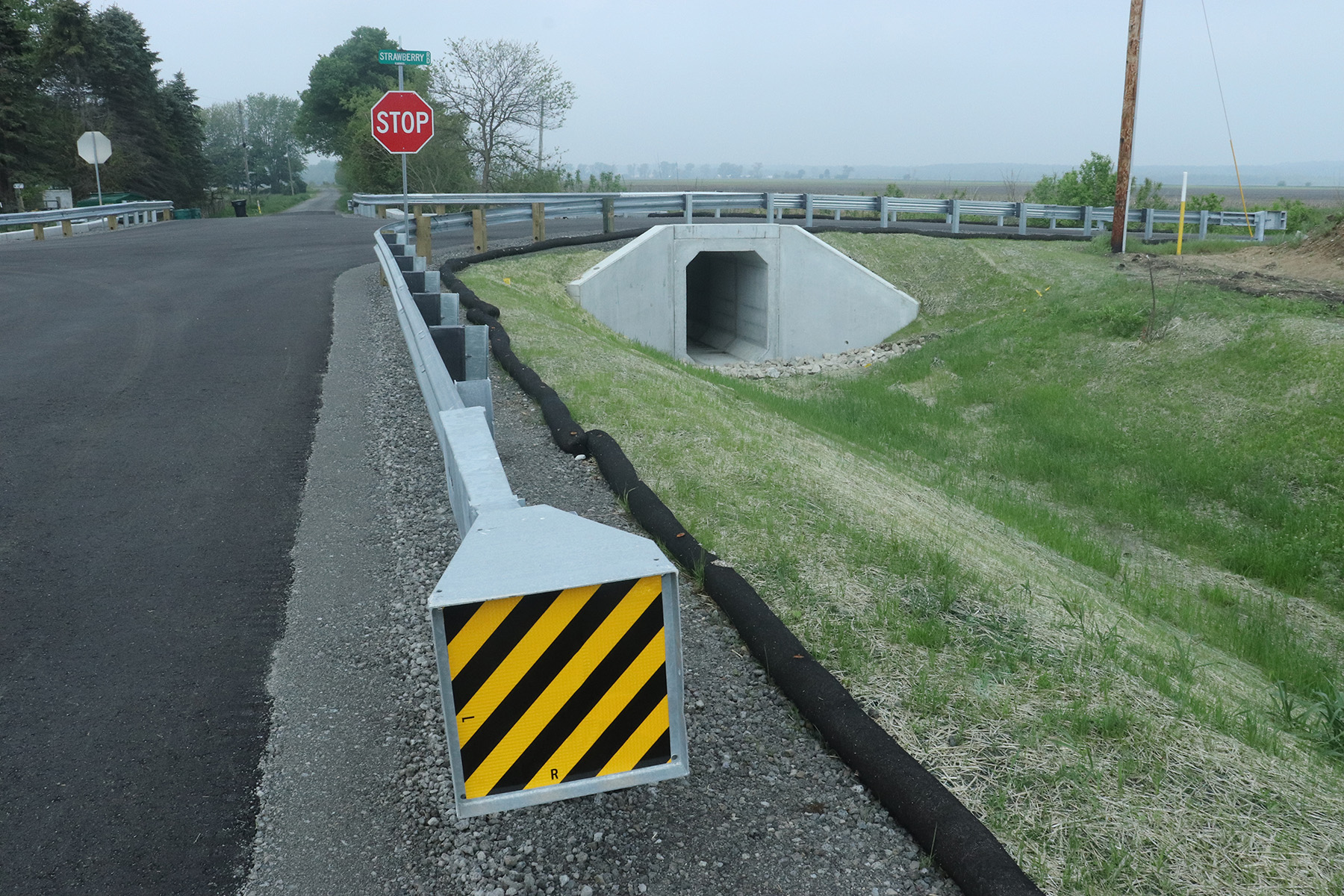