Lochmueller Group (Lochgroup) provided a neighborhood level street access and circulation study within the Saint Louis Hills neighborhood of the City of St. Louis, Missouri. The neighborhood has seen an influx of young families with children, which has prompted renewed interest in pedestrian safety. The resulting plan developed recommendations for reducing traffic volumes and speeds on neighborhood streets and improving the safety of pedestrians and bicyclists.

An extensive public engagement process was undertaken to better grasp the issues and desires of the neighborhood. A resident survey on transportation needs garnered almost 400 responses and multiple public meetings were held to form an in-depth view of the community’s needs. Additionally, interviews were conducted with the multitude of educational institutions in the study area, as well as City of St. Louis staff, to understand the operational concerns and constraints of the neighborhood.

A comprehensive data collection effort was undertaken to assemble an inventory of information from which informed recommendations could be developed. This data was utilized to evaluate potential treatments and either confirm or refute their viability. The data collected included:

The issues were then prioritized based on the preceding information. From these issues, counter-measures were developed along with a short-term/long-term priority, conceptual design schematic and estimated capital cost for each treatment. Some of the recommendations involved: 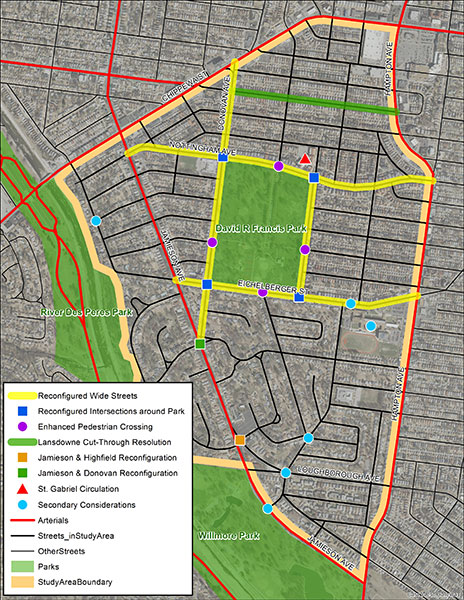